Reasons Why Black Pepper Is Truly the King of Spices

Reasons Why Black Pepper Is Truly the King of Spices

In the tropics as well as in the western diet, black pepper is the ultimately irreplaceable spice. In addition to the pungent flavor which spices the dishes up boosting the flavor, it also aids in improving health. So, it is only fair that it is known as the “King” of spices. Black pepper (Piper nigrum L.) is followed by the “Queen” of spices, cardamom (Elettaria cardamomum M.), where both are perennial crops of the tropics and are the most important and most widely sought-after spice crops of the world. 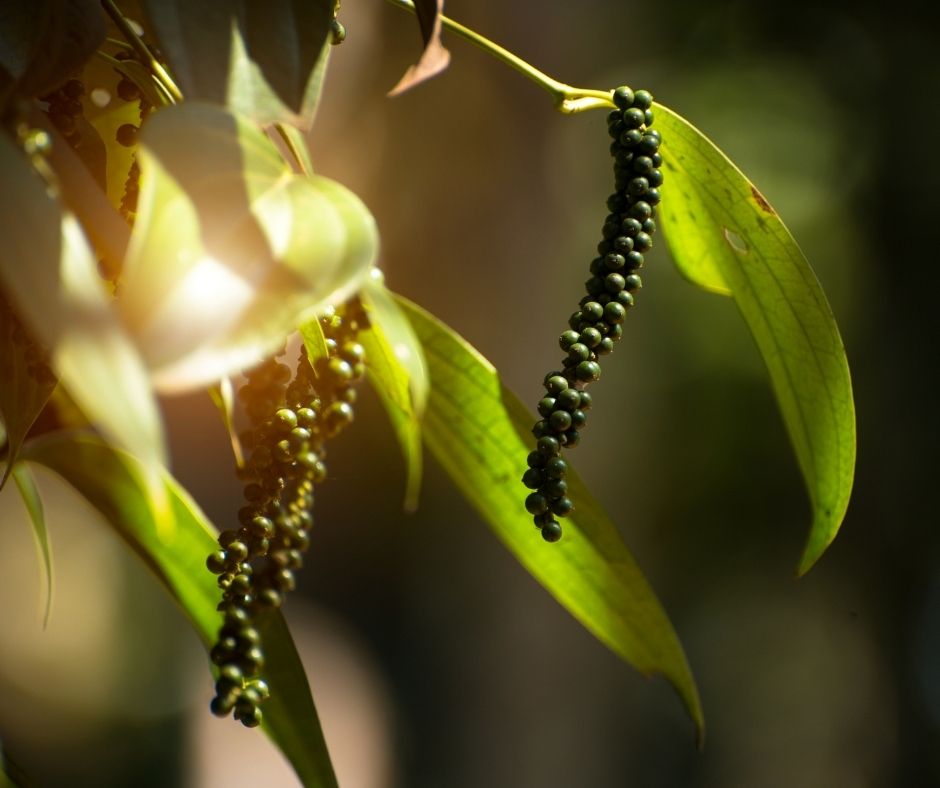 Black pepper, also called pepper, is a perennial climbing vine of the family Piperaceae. Since it is a vine, to support the growth, supporting trees, poles, or trellises enhances its successful growth and yield. The treasure is the hotly pungent spice made from its fruits. Thus, cultivated for its fruit, which is usually dried and used as a spice and for seasoning. The same fruit is used to produce white pepper and green pepper. Black pepper is native to South India and is extensively cultivated there and elsewhere in tropical regions. The fruit, when fully mature, turns dark red. Its unique flavor is favored by many for its overall characteristic of spicy, woody, warm, terpy, and herbaceous sensations.

History of Black Pepper, the “King of Spices”

Black pepper has a long history. Pepper has been used as a spice in India since prehistoric times. It was probably first cultivated on the Malabar Coast of India, in what is now the state of Kerala. Pepper finds a mention in Greek and Roman history as well. Once it was called Peppercorns and they were a much-prized trade good, often referred to as “black gold” and used as a form of commodity money. The term peppercorn still exists today. Also, this has aided in building new trade routes across the globe boosting economic growth as well. 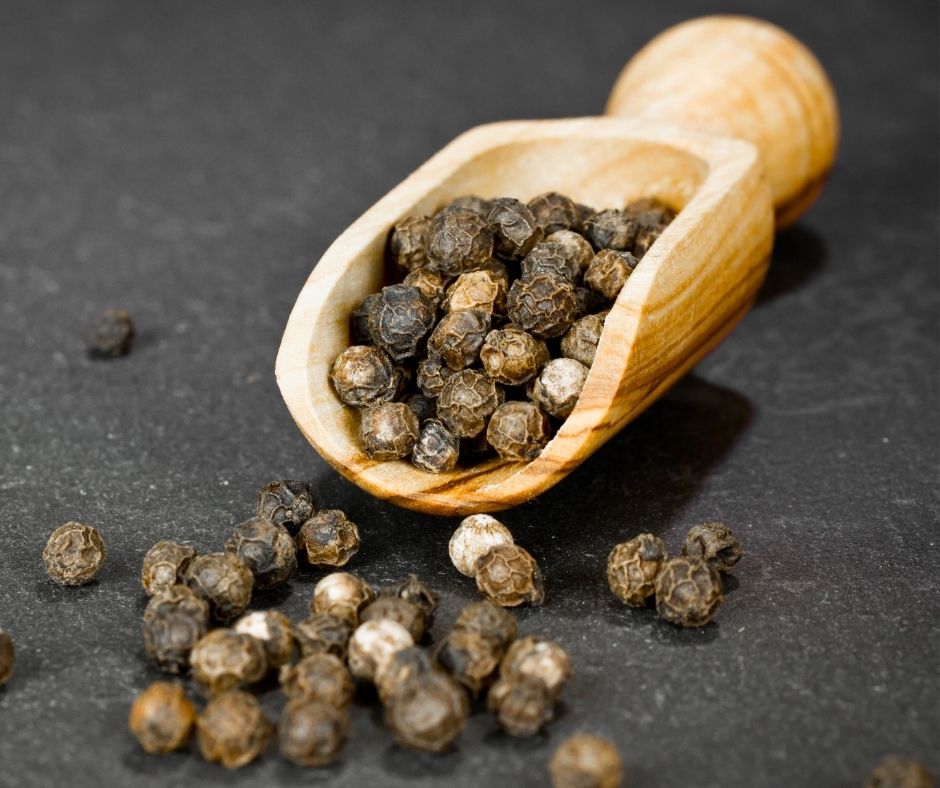 The term “king of spices” does not come simply because of black peppers’ unique pungent flavor, but also because of their immense health benefits. From ancient times the medicinal value of Black pepper, the dried berries of the Piper nigrum vine, has been part of traditional Ayurvedic medicine for thousands of years.

From much research as well, it is now said to consist of many health benefits. The presence of antioxidants, vitamin A and carotenoids help in curing cancer and other lethal diseases. Thus, adding black pepper to most of your daily diet is the best way one can stay fit naturally. Black pepper helps in good digestion, thus, black pepper curbs colon cancer, constipation, diarrhea, and other types of bacterial types of diseases if consumed daily.

The combination of hot water and black pepper is very beneficial to intestinal health. It cures dryness by replenishing the skin cells. Also, it is commonly used to remedy cold by crushing black peppercorns and adding them to a teaspoon of honey. Honey is known to soothe a sore throat, suppress cough, and can boost the cold-fighting action of black peppercorn.

For many chronic or long-term conditions such as cancer, heart conditions, diabetes, asthma, and so on, inflammation is a key underlying issue. Through much research, it was discovered that the active compound ‘piperine’ in black pepper is very effective against inflammation. It is well known that higher cholesterol levels are a warning sign of a possible heart attack.

However, regular consumption of black pepper has shown effective results in reducing cholesterol levels due to the presence of piperine. Thus, this compound piperine is not only effective in fighting inflammation but also reducing the accumulation of excess cholesterol in the body by breaking down excess fat. This also improves your body’s metabolism. Thus, helps to lose weight with black pepper consumption as well.

Further studies have discovered that black pepper shows an ability to improve one’s blood glucose metabolism. A regular intake of black pepper may show a positive response when it comes to insulin sensitivity. However, more research is needed on this matter.

Cold and cough are said to be normal respiratory problems, yet they can be easily remedied by consuming black pepper. It also helps in preventing gout which is a type of joint arthritis. Thus, it is also used for people suffering from spinal and joint pain. Also, in a way black pepper helps to detoxify one’s body in such a way that it helps one to sweat and urinate a lot and by this, the body discharges toxins from your body.

Other than these many medicinal uses many other health benefits are coming from black pepper consumption. For an instance concerning mental health, black pepper is also discovered to be a natural treatment for depression. Raw black pepper can be given to depressed people to chew and this will change the mood of the person.

Black Pepper for a healthy stomach

Concerning skin pigmentation, black pepper can prevent it. This condition makes your skin appear white, also called white patches. However, black pepper protects your skin from any sort of skin pigmentation and helps maintain the original color of your skin. Also, it curbs wrinkles and other skin problems if you consume black pepper from a very young age. It also prevents premature aging and dark spots. In summary black pepper is a natural beauty hack indeed. Thus, it helps not only in rejuvenating your skin but if you are suffering from acne, then you need to try black pepper as this will help your skin flush away the intoxicants in the skin and smoothens it. Also, in treating dandruff, black pepper is said to be a good prevention method of dandruff.

Side effects from Black Pepper

Although black pepper is nicely packaged with so many benefits to health and disease prevention, in some cases, consumption of black pepper might unknowingly bring adverse health effects.

For an instance, if you have been diagnosed with calcium oxalate kidney stones, it is important to limit your intake of foods that contain higher amounts of oxalate, and black pepper is one of those food commodities including beets, black tea, chocolate, nuts, potatoes, rhubarb, soy products, and spinach.

It is true that even how good one food source might be, excessive amounts might cause nothing but harm. However, there is no harm in including black pepper in your diet but consume it in moderation having not more than 1-2 teaspoons of black pepper every day where one can boost their health as well as prevent some undesirable diseases. So, there is no question why black pepper is truly the king of spices.