Homemade pickles are made out of vegetables and fruits. There are mainly three types of pickles. They are fresh, fermented, and refrigerated pickles. In Sri Lanka, among local consumers, fresh pickles are more popular such as, lime mango, Ceylon olive (Veralu), June plum, pineapple, rose apple, and many more exotic fruits. There is also Malley pickle, which is a combination of both fruits and veggies.

But, among types of homemade pickles, fermented pickles are the most famous type of pickles. These are made by immersing selected one or more fruits or/and vegetables in brine, vinegar, or some other solutions and allowing the mixture to ferment for a certain period. Fermented pickles are made from bacterial fermentation.

Out of fermented pickles, without a doubt, the classic pickle would be a cucumber pickle. But there are other fruits and vegetables used in homemade pickling like asparagus, beets, bell peppers, blueberries, cauliflower, carrots, etc.

Role of cucumber in pickles 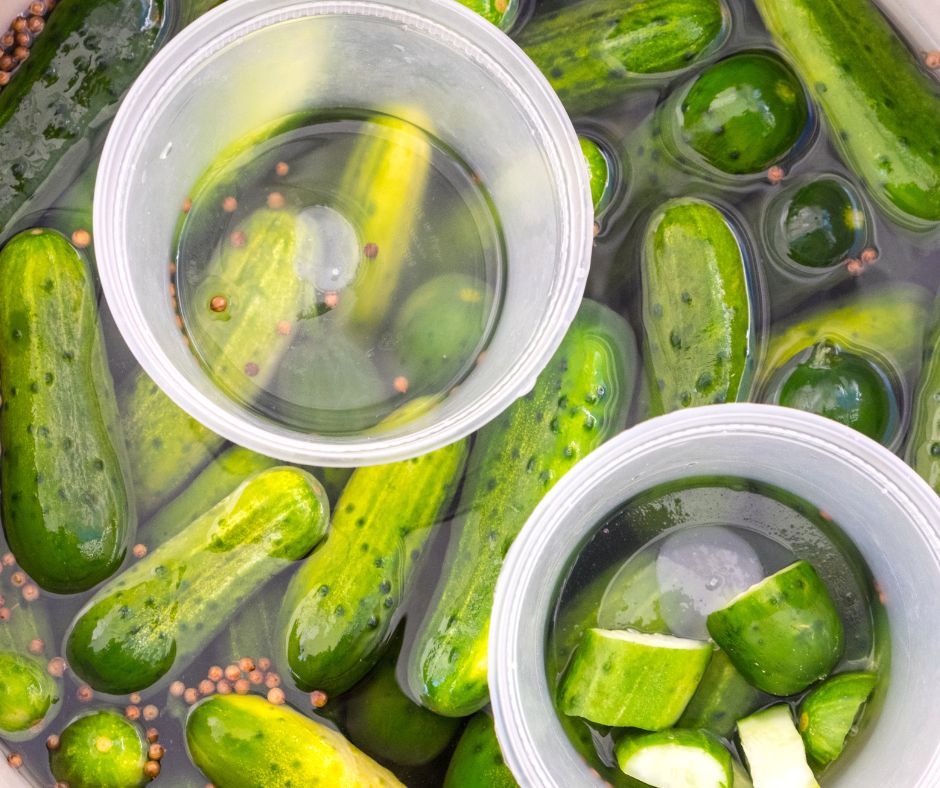 Role of cucumber in pickles

Cucumber (Cucumis sativus) has been the vegetable of choice for both homemade pickles and commercial pickles for ages. The Lactobacillus bacteria, which is naturally present on the cucumber peels during growth, is what causes the pickle to go through Lacto-fermentation. Pickled cucumbers are often part of mixed pickles as well.

The best cucumbers for pickling

The diversity of cucumbers is so great. Regarding homemade pickles, pretty much any type of cucumber can be used for pickling, but true “pickling” cucumbers are with thinner skins, crunchy texture, and smaller seeds.

Homemade pickles with spices are more desirable with heightened flavor. One example would be the cucumber pickle with dill. It is commonly known as dill pickle as it uses dill seeds. It is an ancient Indian spice. In pickling, dill seeds are added with other flavor-packed spices, like mustard seeds, garlic, and pepper. Most homemade pickle recipes call for whole spices for fresher and more concentrated flavor than ground spices.

Using good vinegar is crucial for giving a good taste to homemade pickles. The best vinegar would be distilled white vinegar. It is desirable because it is a clear, colorless vinegar with a mellow aroma. The tart acid flavor of the vinegar does not affect the color of the light-colored vegetables or fruits. In using commercial vinegar, vinegar with a 5% acetic acid content is recommended.

Once pickling is completed, to preserve the pickle, canning is done. Since pickles are sufficiently high in acid, they are to be canned via a method called water bath canning, where jars are submerged in boiling water for a prescribed amount of time to destroy any pathogen in the food and create a seal, thereby rendering the jars shelf-stable.

Fermented pickles are full of probiotics. Probiotics are live bacteria and yeasts. They are important in fighting off bad bacteria in your gut and improving gut health. Also, these probiotics lower the pH level in the colon, which helps the stool to move faster. The antioxidant in pickles helps reduce cell damage and thereby helps prevent cancers.

Benefits of eating pickles before bed

Pickles can be considered a great midnight snack. They’re a great snack at any time of the day. They are incredibly low calories and they give the consumer crunchy satisfaction for the taste buds.

Through research, it has been discovered that pickles are capable of boosting serotonin, which is the chemical responsible for managing our moods. So, some pickles before bed can reduce levels of depression or anxiety disorders. To initiate good sleep, pickles are a good choice as it increases Melatonin, the chemical responsible for regulating sleep-wake cycles and plays an important role in sleep health.

Pickles aid in weight loss. Vinegar consists of acetic acid and helps in lowering your body weight. The presence of acetic acid keeps food in your stomach for a prolonged time, suppressing your appetite, and resulting in a lower food intake.

Pickle juice could help restrain your appetite by stabilizing blood sugar and so helps in losing weight. Gulping down pickle juice adds the probiotic benefit, improving digestion and metabolism and providing similar benefits as pickles.

Research has discovered that mango pickles are rich in antioxidants and Vitamin C, which not only strengthen your immunity, but also help in eradicating free radicals, and prevent cell damage reducing the risk of cancer. It is healthy for your eye and skin health as well.

Side effects of pickles

Excessive consumption of pickles every day has some potential to cause health problems. High salt intake with pickles leads to upset stomach, bloating, diarrhea, abdominal pain, and discomfort. Furthermore, high salt, and vinegar, combined with gastric juice would cause burning sensations in your stomach resulting in gastric cancer. Excessive vinegar intake along with pickles weakens and erodes the enamel of teeth, causing cavities. Additionally, hypoglycemia with very little blood glucose leads to anxiety, dizziness, and drowsiness.

And you guessed right, by avoiding excessive consumption and maintaining a healthy consumption pattern, you could definitely boost your health by eating different pickles.